Diseases are treated and cured with man-made chemicals every day – it’s a fact of life. However, scientists and public officials have long be concerned with the question: what happens when those chemicals (pharmaceuticals) come in contact with a healthy person? As is often the case in science, the answer is: well …. It depends!

When a human or animal consumes pharmaceutical products (PPs), what happens to them? These substances are excreted, disposed from the households through sewers and released into the aquatic environment. PPs are an important group of potential endocrine-disrupting compounds (EDCs)which have recently attracted much attention of the international scientific community. PPs such as analgesics, antibiotics, antiseptics, hormones and antidepressants were detected in influents of wastewaters treatment plants, in surface water, in ground water and even in drinking water resources across the world. Their occurrence and persistence in the aquatic ecosystems can lead to an adverse impact on human life and aquatic systems. Research has shown that PPs may mimic or alter endocrine system pathways, potentially leading to forms of gene alteration (Boberg et al., 2010; Verlicchi et al., 2012). Once in the environment, pharmaceutically active PPs can produce a wide variety of subtle effects on aquatic and terrestrial organisms. Thus, it is crucial to develop efficient and cost-effective treatment technologies for removal of such compounds from water.

Pharmaceutical products (PPs) are a large and diverse group of compounds designed to prevent, cure and treat disease and to improve health. The prevalence of their usage is increasing constantly due to numerous factors such as the discovery of new diseases, the expanding population, the inverting age structure in the general population, and expiration of patents and the consequent availability of less expensive generics. The annual production volume of drugs has been estimated to be several hundreds of tons. (Martinez et al., 2011; Halling Sorensen et al., 2011).


Trace concentrations of human and veterinary pharmaceutical compounds and metabolites have been detected in surface water, groundwater, and drinking water even after going through water treatment including conventional physical and biological treatment processes. Wastewater treatment plants are not yet efficient in removing these micropollutants (PPs) from wastewaters so they are released to the environment. Several pharmaceutical products cannot be oxidized even during conventional biological treatments. Other treatment technologies such as membrane processes are being increasingly implemented in water treatment because these technologies combine process stability with an excellent effluent quality. However, factors such as the cost of treatment, the tendency for membranes to foul, and for pollutants to accumulate in the reject stream are major issues for this technology.

Currently, efforts are directed toward environmentally friendly, less expensive, relatively simple and efficient technologies that can oxidize persistent organic pollutants. BioLargo’s Advanced Oxidation System (AOS) has been successfully demonstrated for oxidation of emergent organic contaminants such as PPs. The preliminary investigation conducted by the research team of Centre Des Technologies De L’Eau (CTE) using the AOS was very promising. The AOS has proved to be an efficient treatment tool for municipal wastewater (MWW) loaded with pharmaceutical pollutants such as Carbamazepine (CBZ), Ibuprofen (Ibu) and Amoxicillin (Amox). The contribution of the AOS to remove PPs from MWW exceeded 95%. Funded by the Canadian ARD NSERC grant, BioLargo and CTE researchers are optimizing the AOS technology for an efficient treatment of MWW loaded with PPs. This project aims to establish the economic and environmental interest of the AOS process for the treatment of persistent organic compounds such as PPs.

Popular posts from this blog 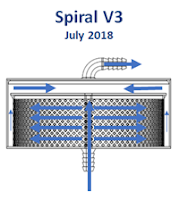 Originally posted on December 14, 2018
In our previous blog posts that detailed the science behind BioLargo Water’s Advanced Oxidation System (AOS), we explained that the AOS treats water by generating reactive iodine molecules at its electrodes. The iodine molecules generated inside the AOS decontaminate and disinfect water in two fundamental ways: 1) by the oxidation of proteins inside bacteria, viruses, or protozoa and 2) by altering the structure of chemical pollutants, often breaking them down entirely. Explaining the mechanism of how the AOS works, we showcased just how effective the AOS is at reducing electrical and consumable costs while treating water. In this blog, we will elaborate upon recent radical design changes BioLargo Water has made to the AOS as part of our effort to continuously improve our technology, and we will illuminate how and why these decisions will result in a more effective and economical product for end-users.